The geographical area where both types of grasses can be grown is known as the ‘transition zone’. This area extends from north Georgia to Virginia roughly. At least this has been the case in the past. 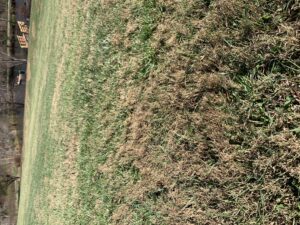 With warming temperatures, the transition zone is growing and the warm season zone is moving north. Bermudagrass can now be found taking over fescue lawns all over the transition-zone as far north as Washington, DC. Most people find this disagreeable, preferring to have one type of grass or the other.

Here in Henderson County North Carolina, bermudagrass can be found choking out fescue lawns. In the image you can see the dormant brown-colored bermudagrass taking over the fescue lawn. Here in western North Carolina bermudagrass lawns are not used because the cooler part of the year lasts longer than the warmer part. If you had a fescue lawn then you would have a brown lawn for eight months. A fescue lawn is green year round.

Bermudagrass can thrive in compacted soils. Fescue does not like soils that have been heavily trod upon. Surface activities such as walking, parking or sports compresses the soil squeezing out the air trapped between soil particles. This air space is where roots grow and obtain oxygens. Compacted soils are detrimental to plant growth and health in general. Aerating lawns using a device to poke holes in the soil to increase air space, loosen soil and increase oxygen can help fescue be more competitive with bermudagrass.

Fescue should be fertilized annually, limed with dolomitic lime every three to five years and overseeded as needed. Failing to provide these nutritional supplements can cause fescue plants to begin to die. Eventually the lawn gets thinner and soil is exposed to the sun. Anywhere fescue isn’t thick and sun reaches the soil low growing weeds like bermudagrass can grow. 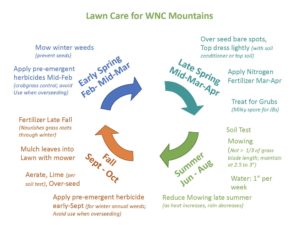 How To Get Rid of Bermudagrass in a Fescue Lawn

Lawn care professionals often deal with bermudagrass infestations in their client’s lawns. These companies will use a non-selective herbicides such as glyphosate to kill the areas of bermudagrass in fescue lawns in August. They will then aerate and overseed with fescue seed to replant these areas with new grass. However, this process takes time and can make the lawn unattractive for a time.

There are herbicides that when used according to directions that can eliminate bermudagrass in fescue lawns. Products containing Fenoxaprop such as Bayer’s BERMUDAGRASS CONTROL is safe for use on Kentucky bluegrass, perennial, ryegrass and fescue lawns. It is not for use on warm season lawns containing bermudagrass, bentgrass, St. Augustine, centipede, bahia, or zoysiagrass lawns. Pylex which contains Topramezone will also kill bermudagrass in fescue. Herbicides should be used with caution and according to labeled directions. Remember to always READ THE LABEL of any pesticide that you choose to utilize.