Rhododendrons Dying at an Alarming Rate

Myself and many of my colleagues in the plant health business have been observing a decline in both established native rhododendrons and new plantings of hybrid rhododendrons from locations across western North Carolina from north Asheville to Brevard, from Lake Toxaway to Chimney Rock State Park, from Pisgah Forest and other wild areas to in town sites in Hendersonville. There seems to be no rhyme or reason as to which plants are affected, with dead or dying plants often dispersed amongst healthy plants.

Recently, I was asked to look at several plantings of rhododendrons at a local golf club. On one hillside voles had killed the plants; you could shake the plants and see they had no roots. On another hillside, rhododendron borer , and insect larvae that tunnels through the center of stems, was slowly killing other plants. 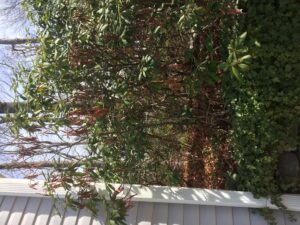 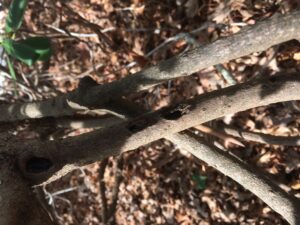 A couple of years ago, I went to look at a mountainside of native rhododendrons killed by voles. At least two acres of plants were dead or dying. Every plant had vole tunnels in the ground at the base of the stem. 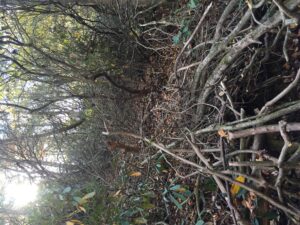 A mountain side full of vole-killed rhododendrons. 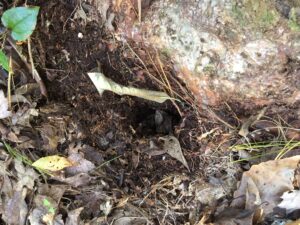 A vole tunnel at the base of a rhododendron.

I have seen many rhododendrons with canker diseases killing branches. Clients have emailed pictures of or brought in stems of rhododendrons and other garden shrubs that have swollen cracked areas on the stems. These cankers eventually girdle the stem and kill the branch. 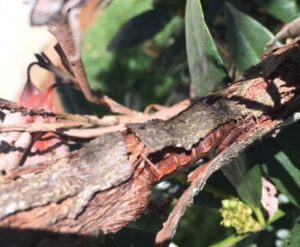 I have visited many gardens where environmental stressors and old age are impacting rhododendrons. For instance, rhododendrons in landscapes often end up in way too much sun due to either trees being removed or new plants being planted in the sun. When people cut down trees to build houses they expose rhododendrons to the sun that were once in the shade. Sometimes people plant the shade-loving plants in the sun. These areas are warmer than the understory of a forest where rhododendrons prefer to live. The areas are usually drier too. Excessive sun, air and soil temperature and dryness weakens shade loving plants and eventually they get attacked by pests. 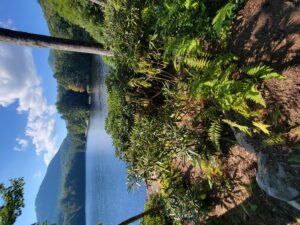 Rhododendron in too much sun. 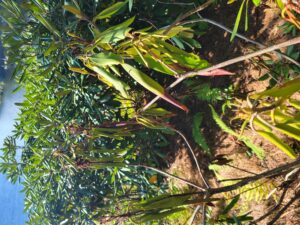 Rhododendron in too much sun.

Overuse of mulch has led to voles being able to feed at will under the mulch without fear of predators. Mulch is piled up covering over the root collars of landscape plants. Once voles have fed on the roots, you can shake the plant and feel that there are no roots anchoring the stem.
A Complex of Factors
I suspect that a warming climate overall is having a negative effect on rhododendron health. The decade (2009-2018) beat out the 1930s as the warmest decade on record for North Carolina. 2019 was declared North Carolina’s warmest year in 125 years of record keeping by The National Oceanic and Atmospheric Administration’s National Centers for Environmental Information (NCEI), housed in Asheville, NC.
Remember, rhododendrons like shady understories of forests where the air and the soil are nice and cool and moist. I suspect that warm, excessively wet summers have led to bark cracking and wounds on stems of sun or drought stressed plants that canker fungi infest. The plants like cool air and soil temperatures.
It is known that insects have more generations per year in warmer temperatures. Instead of two generations per year, and insect species may have as many as six. Perhaps a warming climate is increasing rhododendron borer insect numbers.
In forests, a lack of natural fire due to fire suppression has led to really old, over-mature rhododendrons that are at the end of their lives. Anything can come along and finish these weak over-mature plants off. Fire also suppresses pests such as voles, borers, lacebugs, etc. and the forests of western NC have not been burned regularly except in some areas of managed forests.
Nursery professionals who specialize in native plants claim that native rhododendrons grown from locally sourced seeds do better than fancy hybrids grown in the Pacific northwest. According to my observations, I would tend to agree. It seems that hybrids that are bred to be more compact and flower profusely are generally weaker than native rhododendrons.
Conclusions
So, it seems that rhododendrons are dying across western North Carolina. Should we be alarmed? I think we should be observant and if things continue to worsen where rhododendrons are concerned we should worry. Mostly I think the problem is that more people moving here bringing new diseases, cutting down forests and increasing temperatures locally, gardeners using too much mulch, people planting rhododendrons in the wrong place, gardeners using less hardy hybrids and overall a warming climate is leading to a general decline in rhododendrons.
share Share This Article