Find this article at:
go.ncsu.edu/readext?789231
— Written By Steve Pettis 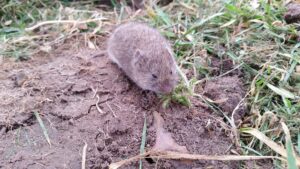 Voles are like little beavers. They use their incisor teeth to chew plants eventually killing the plants. Moles and Voles/

In my position as an NC State Extension Agent in Henderson County, NC, I am in a unique position to see trends in plant health. Local gardeners, landscapers, and nursery growers send me samples of their sick plants. I am a trained plant diagnostician and have a ‘plant clinic’ in my office where I can diagnose plant health issues. Over the last three years I have observed a phenomenon that is causing consternation among gardeners and landscapers alike. 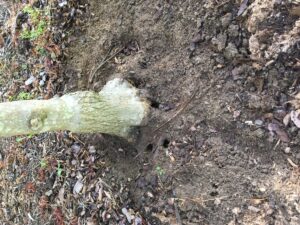 Vole tunnels are hidden under mulch at the base of plants. Moles use the tunnels to access plant roots and eventually kill plants.

Voles are destroying landscapes. The increased numbers of voles correlate to four extremely rainy years. It is known that voles can have periodic population explosions; voles will be a huge problem for a few years and suddenly they will decrease in numbers. Typical populations of voles are 4-6 per acre but during population irruptions, populations can be 20+ per acre.

Voles can be a big problem in apple orchards. Research in the late 1970s at VA TECH determined the impact of voles in apple orchards to be very important. Apple farmers have to constantly be alert for vole infestations.

I have visited many landscapes where voles are obviously killing landscape plants. I have also seen them correlated with dying wild rhododendrons in forests. So are the voles killing the wild rhododendrons? It has been speculated that the lack of fire in the mountains and lack of timber harvest has contributed to increasing rhododendron thickets. Others speculate that rhododendron may be short-lived generally, and it is possible that the large plants we see in the forests 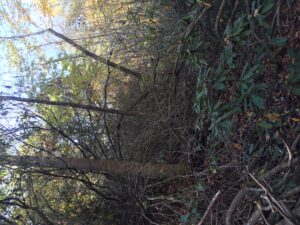 Vole tunnels are found beneath these dying rhododendrons in a local forest. Are the voles responsible or do they simply happen to be here? This site is over an acre!

today are reaching the end of their physiological longevity and getting several pathogens and diseases. Voles might just be one of their problems and this could be all very natural. These and other reasons may contribute to our seeing more wild rhododendrons being killed by voles.

What can people do to control voles that are killing their landscape plants? When controlling rodents there are three methods of control; habitat modification, trapping, or baiting.

Habitat modification is practiced in orchards. Growers mow grass to 2-3 inches between rows and use herbicide to kill grass around trees. Voles do not like open or bare ground because they are at risk of being preyed upon by birds of prey such as hawks and owls or mammals such as coyotes and foxes. In home landscapes affected by voles, I recommend clearing the ground around your landscape shrubs.

Trapping is a lethal control method that consists of mouse traps placed in tunnels, near tunnel entrances, inside a box in the flower bed with appropriate holes for entry by the vole. This reduces the risk of capturing non-target animals like birds and toads and snakes. Make sure the box is large enough so the trap can operate freely. Bait the traps with thick peanut butter and add a drop of vanilla. Rodents can smell vanilla from a distance.

Check the traps regularly (twice a day– early morning and just after dark is best – this is when voles are most active). Clean up dead voles to reduce odor and to avoid attracting predators.

Baiting is another way to lower vole populations. Baits such as Ramik Green containing the active ingredient Diphacinone .005 percent are used. Read the entire label before using any pesticide. Place the appropriate amount of bait based on the directions on label. Determine areas where meadow voles will most likely find and consume the bait. Put the baits in exclusionary devices. These boxes prevent the bait from getting eaten by non-target animals. Put the bait stations under sheds, porches, and other out-of-the-way areas. The bait nuggets are hot-extruded so they are weather-resistant.

The question of secondary predator poisoning comes up often when discussing baiting rodents. The risk is real. Avian and mammalian predators (and snakes) can ingest sub-lethal and lethal doses of rodenticides from consuming sick and dead voles (and other rodents). There is a risk of secondary poisoning of wildlife, but no one seems to be able to say with certainty how large the risk is.

It is understood that most rodents that consume baits will get sick and die underground and out of the reach of predators. However, some percentage will consume a sub-lethal dose and they may be sick and lethargic and more susceptible to predation. That is probably how the poison gets to the predator. Then biomagnification takes over and the predator accumulates more and more toxin in its tissue and liver and gets sick. The predator either ends up in a wildlife rehab center or just outright dies of secondary toxicity. If you follow the directions on the rodenticide label and use it with exclusion boxes under buildings and away from predators, you can minimize the risk to non-target wildlife. But the use of toxicants is a personal choice for the landowner.

Habitat modification is the simplest action gardeners can take to control voles. Clear the ground 18″ around your plants. Trapping with simple mouse traps in exclusion boxes is a lethal control method that won’t put predators at risk. Baiting is effective but carries risks. 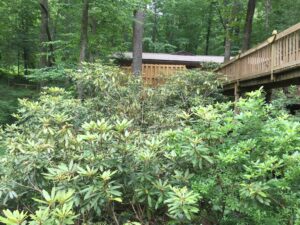 These dying rhododendrons are associated with a vole infestation.