Find this article at:
go.ncsu.edu/readext?867663
— Written By John Murphy (3 months ago) and last updated by Keai Tilly

I clearly remember the first time I pulled up to the Bullington Horticultural Learning Center after interviewing for the job here in 1999. I slipped under the locked gate of the grounds to find a lonely facility and unkempt landscape. It had obviously shone in its day, but was now weedy and overgrown. Wonderful mature specimen plants dotted the grounds, but they were overshadowed by the overall sense of neglect. The only thing being cared for was the yard around the Bullington house. A family who was renting it kept the yard mowed and they had a swing set out back for their young son.

Bob and Sally Bullington had built their home and nursery on this place in 1970. Bob operated the nursery, Flora Knoll Farms until his death in 1989. He was known to be curious, smart, innovative, meticulous, hardworking, opinionated and gruff. His innovation at the nursery and his community involvement (being on the committee that founded the NC Arboretum, among others) earned him entry into the WNC Agriculture Hall of Fame. His passion for horticultural education, prompted his wish for his property to be left for that very purpose when he died. 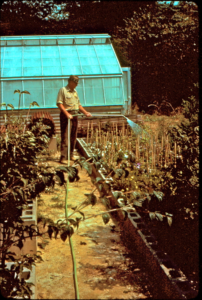 Bob Bullington in his nursery yard

When I arrived ten years later, the place was obviously not thriving. There were many uncertainties in those days—most revolving around funding and purpose. There were a couple of existing programs; a few school vegetable gardens and Pumpkin Patch Kids, a combined Bullington-4-H program that had young children grow giant pumpkins in the lower field at Bullington. There was money to buy gas for the rundown lawn mower, but that was it. 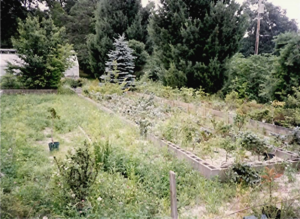 However, over the years, slowly one thing after another serendipitously fell into place as the grounds were developed and new programs were being offered. Wonderfully, capable volunteers began to trickle in to help with building trails, pruning overgrown trees, cleaning up debris in buildings and making a classroom. A new high school course of study for students began in Henderson County Schools in which students with learning disabilities had to get work hours. They began coming out to Bullington weekly and helped with pulling English ivy, clearing brush and weed eating. Programs for elementary school students became more and more popular and buses were coming and going each spring and fall. 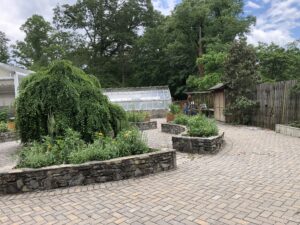 The nursery yard is now the location of the Therapy Garden

A few people became attracted to Bullington’s vision and helped to fund various capital improvements. More amazing volunteers showed up who managed other volunteers, helped to raise funds and shape the vision of Bullington. Every year it seemed, we made new improvements to the property; converting the two car garage in the Bullington house into a meeting space, creating a perennial border, herb garden, and therapy garden with a pavilion and greenhouse. The native woodland garden, pollinator garden, dahlia garden and fairy trail soon followed. At some point we finally crossed a threshold where I was comfortable calling this place a botanical gardens and we changed the name to Bullington Gardens.

We developed more programs and started a horticultural therapy program which overtime has served students with special needs, the elderly, adults recovering from addiction, and adolescents struggling with mental health challenges.

In more recent years, we became our own nonprofit organization, and just last fall acquired the land from the organization it had been donated to.

The story of the past twenty three years was certainly not without its challenges, there were many speed bumps along the way. But it is most certainty a story of generous and capable people who rallied around a project and caring for its future. They gave what they could (funds, muscle, expertise) to convert a dilapidated facility into a botanical garden that is now visited by thousands of people each year—either as visitors or as participants in a program. Bullington Garden has surpassed my wildest dreams. With my 1999 lenses, I could not have predicted the enthusiasm and generosity which brought us to this point.

As I retire in just a few weeks, I have much gratitude for the Henderson County office of N.C. Cooperative Extension, Henderson County Public Schools and the many hundreds of community members who donated their money and volunteered their time over the years in creating a thriving and loved garden. It has been an amazing twenty three years.