Find this article at:
go.ncsu.edu/readext?835102
— Written By John Murphy (2 months ago) and last updated by Keai Tilly

Many gardens are planted for the big color show in spring and summer, but when winter rolls around there are few things that hold much interest in those gardens. There are some plants that reserve their show for winter or others that are just attractive all year long. Evergreen trees and shrubs, especially conifers, certainly have their time in the spotlight in winter. But many other plants have some ornamental feature that provide for winter interest.

Although the list is short, there are some plants that bloom in winter. Native witch hazel begins to bloom in late November and the unusual yellow flowers persist for some time. These are not specimen plants but are great along a woody border. Additionally, there are many named nonnative witch hazel varieties that display a range of flower colors and these typically bloom in February. Winter jasmine is a scrambling shrub that bursts out in a riot of yellow flowers in January. Edgeworthia has wonderfully fragrant creamy flowers that bloom in midwinter. Camellias put on a surprisingly colorful show even on the coldest of days. Different types of camellias bloom at different times throughout the winter. The flowers of hellebores, from white to nearly black, begin around February and can remain attractive for a long period.

Another way that plants can show winter interest is by producing late-season berries. Hollies are best known for this, both deciduous and evergreen species. 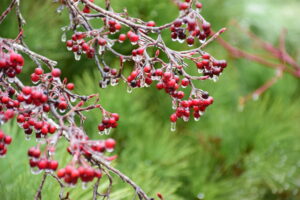 But other plants such as beauty berry, aronia, and viburnums produce berries that last somewhat through the winter. These are also great plants to attract birds to the garden. My personal favorite winter berry plant is Japanese skimmia, a small evergreen shrub that reliably produces bright red berries.

For some plants, particularly those that have been pruned well, their beauty can be found in their interesting structure. Generally, weeping trees including Japanese maples have appealing architecture that make them four-season trees. One of the best small trees for structure though is Harry Lauder’s walking stick, a corkscrew hazel that has wildly twisting branches. Corksrew willows also have appeal once their leaves have been shed. 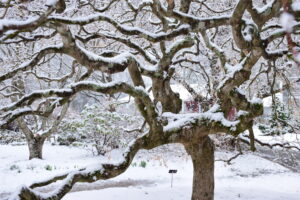 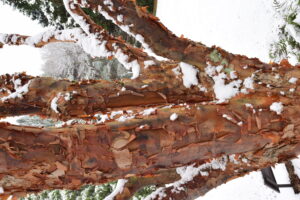 Some plants have attractive bark and stems, such as the colorful stems on coral bark Japanese maples, and red and yellow twig dogwoods. These plants wait until their leaves drop before they reveal their color. Other plants have exfoliating bark that makes them attractive in winter. Paperbark maples have a beautiful pealing cinnamon-colored bark. Kousa dogwoods have an attractive flaking bark, but most need to get to a certain age of maturity before it is revealed. Stewartias, especially the Japanese stewartia is somewhat finicky, but its brown, gray patterned exfoliating bark is hard to beat. Other plants with interesting bark are river and paper birch and clethra.

Adding a selection of these plants that have interesting bark, possess some structural appeal, have berries, or bloom in the winter makes the garden attractive throughout the whole year.