Find this article at:
go.ncsu.edu/readext?833992
— Written By Steve Pettis

According to an article from NC State University College of Agriculture and Consumer Science news services, “North Carolina’s Christmas tree growers are busy harvesting to prepare to supply roughly 5 million trees by Thanksgiving ­– hustling to meet a demand that experts think will be high this year.” 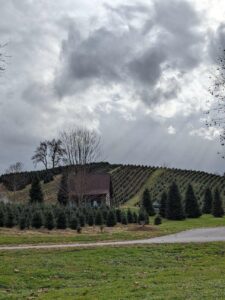 The article continues, “North Carolina customers should consider themselves among the luckiest in the United States,” said Travis Birdsell, an Extension agent for NC State University who works directly with Christmas tree farmers in the state. “They’re close to one of the largest Christmas tree growing regions in the United States. A lot of the stores are supplied directly by growers, so they have a direct supply of trees.”

Facts about the North Carolina Christmas Tree Supply in 2021

In the article, Travis Birdsell, an Extension agent for NC State University who works directly with Christmas tree farmers in the state, provides the following facts: