Thanks Noah!! You Will Be Missed!!

Find this article at:
go.ncsu.edu/readext?812950
— Written By William Kelley and last updated by Keai Tilly

Well shucks!! Just when you think you have your all-star team assembled, one of them becomes a free agent. Such is the case with our livestock agent, Noah Henson. He will be leaving us on August 6 in search of greener pastures – or at least an opportunity that better fits the needs of him and his family for the present. We wish him well, but he certainly leaves some big shoes to fill. 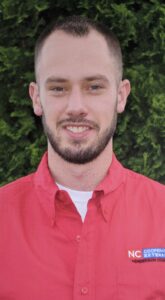 Noah came to us in the Fall of 2017. He since has done a great job working with our livestock producers and our 4-H youth. One of his key accomplishments has been getting more of our beef producers enrolled in the Mountain Cattle Alliance. This usually brings them several additional pennies per pound when they sell their stock. Noah was able to bring at least five Henderson County growers into that program since he started.

Noah has also been heavily involved in coaching our youth for livestock shows. He came here with a great background in that area having won a national championship as a youth himself. His expertise in this area has helped the youth he serves in Henderson and Buncombe County become much more competitive and successful in recent livestock shows and judging competitions.

Noah has quickly developed a reputation around the southeast and nationally for his livestock judging expertise. He is often invited to judge competitions across the state and in other states at fairs and shows. Such recognition at such an early stage of his career is outstanding.

Noah has also brought a great personality to our team. He has a keen sense of humor, and it has always been a pleasure to have him around the office on his days in Henderson County. We share Noah with Buncombe County, but he has always been available whenever he was needed here in the county. He is a great team player and has been a key participant in Farm City Day since he arrived.

We wish all the best to Noah, Brittany and their 18-month-old son, Callahan, as Noah begins a new career. We have all certainly been blessed to have gotten to know him and hope he will be no stranger to Extension activities as he changes careers. We appreciate his contributions and know that he has made a lasting mark in his short time here.

The search for a new livestock agent for Henderson County will get underway shortly. We are confident that we can find someone to pick up where Noah left off and move our livestock program to even greater accomplishments.

In the meantime, Noah, we thank you for your good work and hope that your newly chosen path leads to many wonderful things for you and your family. We’ll keep the light on just in case you drop by or should your road lead back at some point.