Pest Alert – The Biting and Stinging Insects of Summer

Find this article at:
go.ncsu.edu/readext?815865
— Written By Steve Pettis

During the many talks I give to homeowners and professionals, I try to drive home the point that most insects are beneficial in some way. Some beneficial insects are even better at pest control than humans are. Besides, being married to an entomologist (a person who studies insects for a living if you can imagine that), I have to try to love insects. No matter how hard I try however, there are some bugs I just can’t abide. 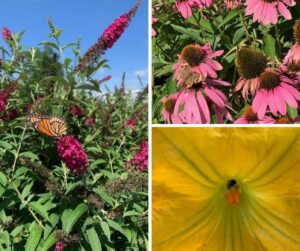 Most insects are either beneficial or harmless to humans. Pollinating insects are extremely important to agriculture and food production. 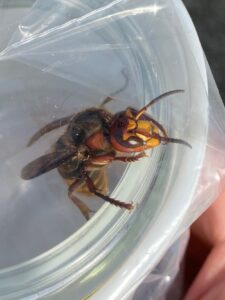 Chiggers – Nothing itches quite like a chigger bite. I was reminded of this first hand this summer when I was nearly devoured at a friend’s home by the little beasts. Chiggers or more commonly known as red bugs are notorious pests of humans.

The chigger is the larval stage of a mite that is barely visible to the human eye. Chiggers feed on many forest animals. Where rodents and other wildlife like deer are plentiful, chiggers usually abound. Heavily wooded areas throughout the south are notorious for being chigger infested. Chiggers are active almost year round in the deep south but in general between April and October.

The chigger crawls onto a person’s legs when the person brushes past plants. The pesky mite larvae crawls up the leg and attaches where one’s clothing fits tight. Usually this is the area around the ankles and the waist. Itching begins when saliva from the mite is injected into the skin and the tissue begins to dissolve.

Repellents containing DEET are most effective in repelling chiggers. They must be applied to socks and over the entire outer clothing and exposed skin to be effective. Chigger bites can be soothed with baking soda pastes or a topical antihistamine lotion. A warm soapy bath will remove chiggers but the bites will continue to itch. Keep the area mowed and remove any shrubby undergrowth from areas where you walk or sit.

Mosquitoes The mosquito is another pest of gardeners. Nothing creeps me out like being swarmed by mosquitoes. Feeling your blood pressure drop due to a sudden loss of a couple of pints and the incessant buzzing in your ears can drive you mad.

Only females bite. Using her needle-like mouth, she stabs you through the skin.

When a mosquito finds a blood vessel, saliva flows into the wound to keep the blood from clotting. Most people are allergic to the saliva, which causes an itchy welt to form on the skin. After the mosquito has sipped enough blood, she retracts her needle and flies away.

The mosquito has caused more human suffering than any other insect in history. Over one million people die from mosquito-borne diseases every year! A child dies from malaria every 40 seconds. Below are just some of the diseases mosquitoes carry:

Ticks – The third of the triumvirate of pests of gardeners is the tick. Although there are several ticks that parasitize people, the deer tick is of the most concern. Ixodes (Deer) ticks are much smaller than common dog and cattle ticks. In their larval and nymphal stages, they are no bigger than a pinhead. Ticks feed by inserting their mouths into the skin of a host and slowly take in blood. Deer ticks are most likely to transmit infection after feeding for two or more days. There is no Lyme disease vaccine available.