Henderson County Center will be closed on Mon 01/18/2021 for the holiday. We are open, but limited to three visitors at a time. Appointments are recommended.

Find this article at:
go.ncsu.edu/readext?732991
— Written By Steve Pettis

The black and yellow orb weaver is a showy spider usually noticed in late summer. The bodies of females grow to a little more than one inch long; males are much smaller. The third pair of legs is about half as long as the other legs. The segment to which the legs and mouthparts attach is covered with very short, shiny, white scales. The abdomen is egg-shaped and conspicuously marked with black and yellow. 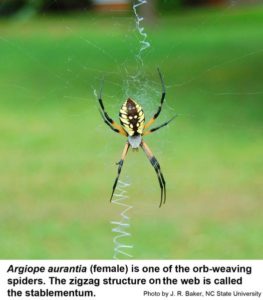 Females spin orb webs (spiral sticky threads suspended on non-sticky spokes) with a conspicuous white zigzag structure in the middle called the stablementum. Spider experts disagree about why these spiders spin stablementa. Earlier the stablementum was thought to give stability to the web. Now the thinking is that the stablementum attracts insects or keeps birds from flying through the web.

All spiders are carnivores that prey primarily on insects. Black and yellow garden spiders find their prey by sensing vibrations in the web. They eat anything that doesn’t tear itself loose from the web. At night, females consume the sticky strands of the web and spin new ones. It is thought they gain some nutrition from minute insects and even miscellaneous organic matter caught in the web.