Find this article at:
go.ncsu.edu/readext?724164
— Written By Steve Pettis

Southern blight is caused by the fungus Sclerotium rolfsii, which lives in soil, on plants (including weeds), plant debris and mulch. The fungus can be spread through movement of infested soil, plants, or mulch. Excessive soil moisture can lead to serious infestations in perennial ground cover plantings as well as shrubs and flowers. 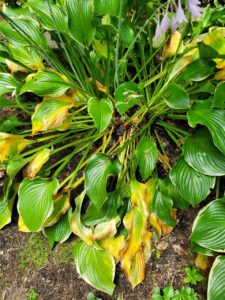 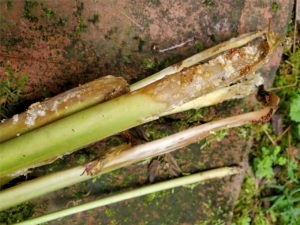 The fungus causes a rot at the base of the plant. Plants turn brown and die. The fungus forms little round structures called sclerotia and the presence of these survival structures is diagnostic.

Infested soil must be removed. Look for the edges of the infestation based on visible dead/dying plants, fungal material, and sclerotia. Remove all of the affected plants and roots. Be sure to dig up at least three inches of the topsoil, from at least 12 inches beyond the area of diseased plants. Dispose of plants and soil in the trash.

Any new plants and other plants surrounding the infested plants should be treated with fungicides. The NC State Extension Pesticide Handbook says the following products are the best for control (highlighted ones likely easiest to find):