Find this article at:
go.ncsu.edu/readext?718312
— Written By William Kelley and last updated by Emily Capps 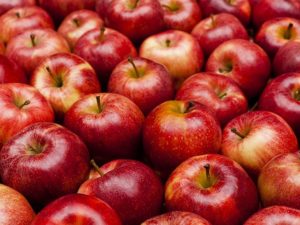 Wow!! Harvest time already? Yes, it’s apple time in Henderson County – the apple capital of North Carolina. This season will be a little different than most. With COVID-19 a part of our daily lives now, its impacts carry over into the agricultural world as well. That will have an impact on picking, packing and on our many direct markets.

The good news is – we have apples. As is most usually the case, the Henderson County apple growers have managed to produce a crop despite having to wage war with insects, diseases, freezing temperatures, hail and excess rain.
While the quality of our crop may be slightly less than desirable this year, as always Henderson County apples will still foster a taste like no other. The prolific production of the popular pome will once again satisfy the craving we all get for that fresh tasty fruit around this time of year.

The earlier varieties such as ‘Ginger Gold’, ‘Blondee’, ‘Gala’, ‘Daybreak Fuji’ and soon ‘Honeycrisp’ will kick off the season. But don’t limit yourself to the apples available in August and September. Some of the tastiest apples are our later maturing varieties which will come along in October and in some years go into November. These gems such as ‘Pink Lady’, ‘Granny Smith’, ‘Staymen Winesap’ and ‘Cameo’ will be just as crisp as the fall weather.

Henderson County produces 85% of North Carolina’s apples and apples bring in about $30 million a year to the county economy. With over 30 roadside stands, there are plenty of places to find these home-grown fruits locally.
You may see some changes in direct markets due to the virus. You should be required to stay physically distant from others in the stands, wear masks and use hand sanitizer or wash your hands. Some places may restrict packing your own bags with fruit since they do not want several customers touching the same fruit in a bin, box, etc.

While the NC Apple Festival has been revamped due to the virus this year, we hope there will still be plenty of traffic at our local stands both from within the county and outside the area. Our packers and shippers will still be running full bore to put fresh Henderson County apples in the grocery stores. In the end, hopefully the season can be considered a success, despite the obstacles our growers have faced.

While there may be some changes in how baked goods are handled and sold, there will still be apple donuts, apple fritters, apple pies and apple cakes out there for those that love these sweet delights. And don’t forget the apple cider. Whether you like the traditional cider or cider with a kick, there should be plenty of each available. Hard cider is only available at establishments licensed for it, so you’ll have to make a side trip for that. Some roadside markets are already open for the season and others will be opening soon.

This has been a challenging year to grow apples. Starting with a February that more resembled May, the trees thought they had skipped winter. However, several cold events in April and a Mother’s Day freeze brought reality back. As a result, the crop did sustain some damage during those cold events.

If that weren’t enough, several hailstorms have hit in various places around the county and hurt fruit quality. Then, for the third year in a row, we have had a relatively wet year. It’s been spottier this year, but overall, rainfall has been above average. That always makes for greater challenges in controlling diseases on the trees and fruit.

However, over the next four months or so, Henderson County apples should be in good supply. Consumers will have that opportunity they get at this time each year to enjoy the best apples on the planet. No, these won’t be shipped from across the country. They won’t have been stored for nine months. These will be fresh Henderson County apples. As the old commercial used to say: “It doesn’t get any better than this”.