Find this article at:
go.ncsu.edu/readext?700648
— Written By Karen Blaedow

Several calls about high numbers of cucumber beetles and feeding damage on cucurbits started coming in this week. The spotted and striped cucumber beetle are both series pests of cucumbers, squash, pumpkins, and watermelons. If you are growing any of these crops it is important to scout for cucumber beetles on a regular basis since damage can occur anytime during the growing season from plant emergence to harvest. In addition to feeding damage to leaves and fruit, adult cucumbers also vector bacterial wilt which causes infected plants to suddenly collapse and prematurely die. Early detection and mitgation is key to managing these insects.

What to Look For 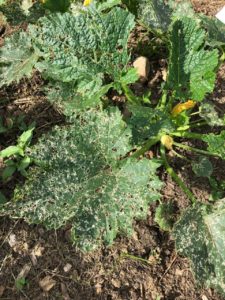 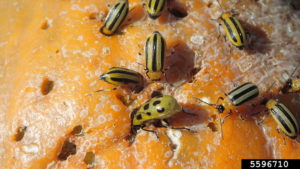 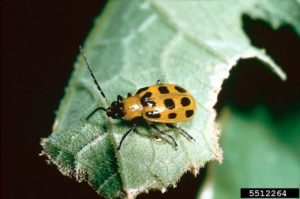