Find this article at:
go.ncsu.edu/readext?691725
— Written By Steve Pettis
Large mature trees are one of the things that makes a community great. However, trees are like people; they get old and their resistance to health problems goes down. In the case of trees they become more susceptible to attack by insects and diseases.
Pine beetles are a suite of numerous beetles that attack old or stressed pines. Weak pines emit chemicals that beetles can smell from miles away. If you sit on your porch with a cold refreshing adult beverage pine beetles will dive into it. They are attracted to the alcohol which is similar to chemicals emitted by stressed trees. 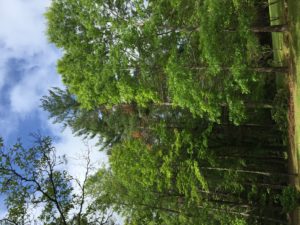 Generally the first beetle to come to the party is the Southern Pine Bark Beetle, a tiny gnat-sized insect. Damage begins with Southern Pine Bark Beetles attacking the top of the trees. You will notice yellowing then dead branches in the tops of your pines. The Southern Pine Bark Beetle feeding attracts other beetles.
Ips Beetles are next. These attack the middle of the tree. The last to arrive are the Black Turpentine Beetles. These attack the lower portion of the trunk and cause great runs of sap to ooze out of the bark. In just two years the tree will be dead.
This suite of beetles kill trees by tunneling under the bark. They drill through the bark then excavate the cambium layer separating the bark from the wood. Eventually the tree dies. Beetle killed trees will have loose bark that you can easily remove. 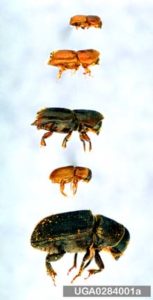 So, what if anything can you do? It is important to keep your trees as healthy as possible. Fertilize your trees and water them during times of drought. Limit activity under the trees that can damage roots. Mowers are one of the worst things for the long term health of trees. Mowers are heavy and their tires compact soil. Mower blades and tires damage roots. Mulch trees out to the drip line or the edge of the canopy to limit mower activities beneath trees.
If you have large pine trees on your property you need to keep an eye out for yellowing then dead branches in the top of your trees. There is no effective pesticide treatment. In large pine forests it is advisable to cut down infested trees. Beetles live in the dying trees not the completely dead ones. Felling living infested trees early can limit the beetles spread in a large forest but in the home landscape this is much less effective.
Here is some information on pine beetles:
Southern Pine Bark Beetle information
Black Turpentine Beetle information