Did You Know…About the Fireless Cooker?

Find this article at:
go.ncsu.edu/readext?696635
— Written By Renay Knapp and last updated by Emily Capps

By the end of 1915, Home Demonstration Clubs were organized in 31 counties with over 2500 members. The farm women who joined were hungry:  a) for the new experience of learning to do things through seeing them done; b) for the opportunity of coming together in interesting work; c) for the chance to produce an income which would furnish them with things they had so long desired; and d) for an outlet through which they could express themselves and get recognition from others for what they had done.

One labor saving device that become very popular during this time was the “fireless cooker”. It was discovered that if you confine heat in a small space, the cooking process would continue for hours.

The proof was in the eating and for many the fireless cooker meant a hot dinner was being cooked while the homemaker helped in the fields or did other family chores.

One home agent planned to give a fireless cooker demonstration, but ran into problems when her buggy broke down, preventing her from reaching her demonstration site. People stopped by to help her and she served an impromptu meal from the back of her buggy. The men who stopped to help her were impressed with the quality of the meal and several went home and built fireless cookers for their wives.

The fireless cooker was a lard stand (a large wooden keg like container in which homemade lard was kept) surrounded by sawdust and placed in a wooden box. Two soapstones (a rock that is composed largely of the magnesium rich mineral talc, sometimes used for the construction of fireplace surrounds because they hold heat so well) were heated to a high temperature. One was put in the bottom of the stand. The pot of food to be cooked was placed on top of it. The pan was covered and the other soapstone was placed on top and left for several hours. The result:  a tender chicken or cut of meat.

What does this remind you of? Crock pots and instant pots! 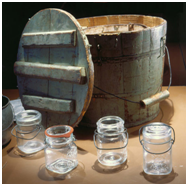 And did you know…

North Carolina still has volunteer organizations similar to the Home Demonstration Clubs in 1915, but they are known as Extension and Community Association clubs. They still learn through demonstrations, look forward to getting together to work on common programs, and use their creative skills for recognition of what they have done. Some use what they learn to produce for supplemental income. If you’d like more information on Extension and Community Association, contact Renay Knapp, Family and Consumer Sciences Extension Agent by emailing renay_knapp@ncsu.edu. Look forward to more “Did you know?” in the next newsletter.