Plants and Their Names

Find this article at:
go.ncsu.edu/readext?675802
— Written By John Murphy and last updated by Emily Capps

Like many people I look forward to the gardening season and the array of new plants that will be released for the season. And I also get a kick out of the names plant breeders give their plants. One of the best names for a tomato is ‘Mortgage Lifter’. The story goes that a West Virginia man, M.C. Byles, bred the plant and sold them for $1 each, generating enough income to pay off his $6000 mortgage.

Our local tomato breeders, Randy Gardner and Dilip Panthee of the Mountain Hort. Crops Research & Extension Center (MHCREC) in Mills River have bred and released a good number of terrific tomato varieties over the years. All go under the ‘Mountain’, name sensibly reflecting their origin; ‘Mountain Pride’, ‘Mountain Magic’, ‘Mountain Gem’, and a newer release, ‘Mountain Rouge’. All are excellent cultivars with good disease resistance. ‘Mountain Rouge’ is a particularly good garden tomato.

Tom Ranney, another plant breeder at MHCREC has released a slew of different and wonderful ornamental plants during his career. His Annabelle-type hydrangeas have rightfully garnered a lot of attention. With the moniker of ‘Invincibelle’, these hydrangeas have added a whole new range of colors to this traditionally white flower. ‘Invincibelle Ruby’ with ruby buds and dark pink flowers is the 2020 Hydrangea of the Year.

In the ornamental plant world, the names have gotten very creative.

There are a number of ornamental plants that have gone fruity; ‘Raspberry Eclipse’ daylily, ‘Blueberry Fair’ iris, ‘Hot Papaya’ Echinacea, or ‘Cranberry Crush’ hibiscus. A line of Beebalm has gotten into the candy; ‘Grape Gumball,’ ‘Bubblegum Blast,’ ‘Lilac Lollipop,’ and some other plants have gotten into other sweets Shasta daisy ‘Banana Cream’ and ‘Lemon Meringue’ baptisia.

There are plant names that evoke romance (or scandal) like ‘Purple Passion’ delphinium and ‘Seducer’ hosta. There’s a whole wedding series of Lenten rose; ‘Maid of Honor,’ ‘Blushing Bridesmaid,’ and ‘Dashing Groomsman’ among many others.

Some that attempt humor, such as ‘Whoops-a-Daisy’ Shasta daisy, ‘Orange You Awesome’ echinacea and ‘Wizard of Ahhs’ veronica.

Some are just a little too cute such as ‘Kiss and Tell’ dianthus or ‘When My Sweetheart Returns’ daylily.

There are some puzzlers like ‘Backdraft’ red hot poker or ‘Christmas Candy’ hosta.

Vegetable varieties are just beginning to get into this game. Who knows what might happen to broccoli sales if their varieties had names like ‘Green  Seducer’ rather than Atlantis and Diplomat.

But whatever plants you’re looking for this spring, I hope the ‘Storm Cloud’ (amsonia) departs and we quickly get back to a ‘Bundle of Joy’ (sedum) in the land of ‘Milk & Honey’ (astilbe). 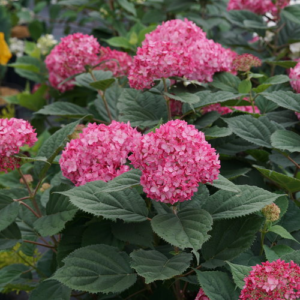 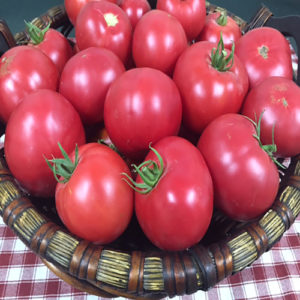