Find this article at:
go.ncsu.edu/readext?671501
— Written By Steve Pettis

The year 1942 was a time of great international turmoil and domestic nervousness. The United States had recently come out of the great depression and the 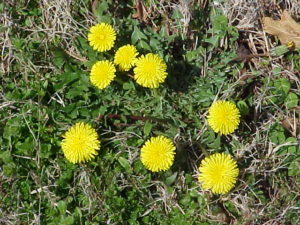 memories of World War 1 were still fresh in many middle aged and older adults’ minds. People had been raised to conserve and were adept at making a little go a long way due to the years of economic hardship that had constituted the majority of many Americans’ lives. With World War 2 less than a year old and looking to be a very long and drawn out affair, people were once again asked to sacrifice for their country. As the USA ramped up its industrial and agricultural production to feed and supply its troops, average Americans were trying to find ways to feed themselves. 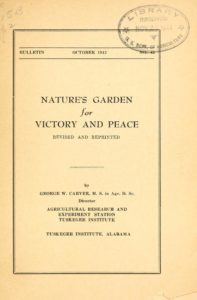 Meanwhile at the Tuskegee Institute in Alabama, a scientist with a Masters of Science in Agriculture was doing his part to help people feed themselves. The scientist was George Washington Carver. Born a slave in Diamond, Missouri, Carver’s insatiable appetite for learning and understanding eventually led him to become one America’s most famous agricultural scientists. He became the head of Tuskegee College’s department of Agriculture in 1910 and spent the next 33 years educating poor farmers through ‘movable schools’ (a predecessor to the modern County Extension Service) and research-based bulletins. One such bulletin, “Nature’s Garden for Victory and Peace”, bulletin No. 43, revised and reprinted in October, 1942, was a manual on how to gather, prepare, and utilize wild plants or weeds for food.

The bulletin, given away for free to anyone who requested it, included many examples of common plants that are edible and even tasty if prepared correctly. Plants that are useful as salad greens, potato substitutes, potherbs, onion substitutes, and medicinal plants are covered in the publication. Just a few of the salad greens are listed in the table below:

The publication includes how to prepare these natural delicacies as well as some of Mr. Carver’s comments about a few of them. For instance, he says of native clover “The flower heads of these two varieties (red and white) have held first place in delicate and fancy salads for many years. Serve in mixed salads or separately as fancy dictates.” He also describes a way to make a dessert called Strawberry Leather that is reminiscent of a certain modern candy. “Take thoroughly ripe strawberries, mash to a pulp, spread on platters, and dry in the sun or oven; when dry, dust with powdered sugar, and roll up like a jelly cake, cut into suitable-sized pieces and pack away in jars.”

George Washington Carver is famous for the unbelievable amount of agricultural scientific discoveries and inventions he made during his lifetime. He should also be remembered for his pragmatism and common sense approach to problems that he saw around him. During a time of war, hardship, and sacrifice he published “Nature’s Garden for Victory and Peace” to show rural Americans that they had food options just outside their doorstep.