Find this article at:
go.ncsu.edu/readext?767833
— Written By Steve Pettis 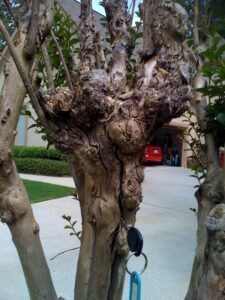 Repeatedly cutting large stems results in ‘knuckles’ that are unsightly.

Many gardeners have crapemyrtle trees established in their landscapes. Unfortunately, the tree has the dubious distinction among gardeners and horticulturists as the plant that gets butchered in the worst way by uninformed property maintenance companies and homeowners. ‘Crape murder’ is a term that is used to describe the horrific pruning that many unfortunate Crapes must endure and it isn’t far off the mark. To those of us who empathize with abused creatures, the sight of mutilated Crapemyrtles is hard to stomach. People have gotten the idea that crapemyrtles should be cut back to the main stem each year. This is untrue.

Crapemyrtles are trained by nurseries into two basic shapes: single-stemmed tree-form and multi-stemmed. To achieve these shapes, growers allow crapes to grow for a year in either containers or fields, and then cut them down to the ground in the spring of the second year. Later that summer when the plant has grown many stems from the original root system, the grower will choose the single best stem and train it into a single-stemmed tree-form tree or choose an odd number of the best stems (3 or 5 for example) to form a multi-stemmed tree. These trees are then grown out to salable size and purchased by landscapers and homeowners. 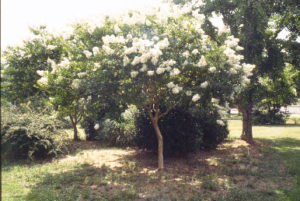 Some crapemyrtles are grown as single-stemmed trees.

Like most trees, crape myrtles should be pruned in the winter when they are dormant. For trees that are just the right height or shorter, simply prune off the old flower heads and seedpods. If the tree was perfect last year but the past summer’s growth made the plant too tall, remove just that growth. Always remove any suckers that have sprouted from the roots or lower trunk. The key to pruning crapemyrtles is to not allow the trees to get so overgrown that extreme pruning is ever necessary. I also like to thin out some of the interior branches so the crown of the tree is more open. 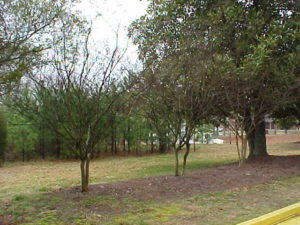 Some crapemyrtles are grown as multi-stemmed trees.

Sometimes a harsh pruning is necessary. Overgrown crapes can be pruned in such a way as to minimize the aesthetic impact of the removal of sizable portions of the tree. Begin by identifying the main stems or first-tier branches and avoid cutting these. Next, prune out interior limbs that are undesirable and suckers that have grown from the roots. Finally, decide the height you wish the tree to become. Make cuts at this height on the second and third-tier branches. The tree canopy should be umbrella-shaped when you finish. 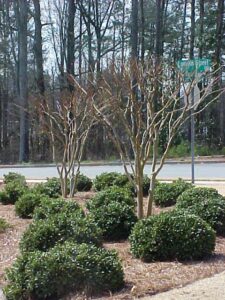 Do not worry about killing your Crapemyrtle through pruning. Crapemyrtles are impervious to even the harshest pruning. The other day I gave a talk to a garden club at a very old historic house and out back was the stump of a 14-inch diameter crape that had gotten too big and was chopped down to the ground. Suckers sprouted from the stump and these were nearly 2 inches in diameter. From 10 feet away it looked like a normal multi-stemmed crapemyrtle. It just goes to show how tough these plants are. 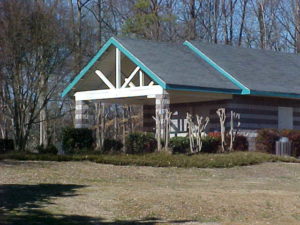 These trees have been pruned harshly. There is one on the left that has not been butchered. In actuality, this was a necessary evil as these trees were blocking the view of this public building inhibiting security.