Japanese stiltgrass is an invasive summer annual weed commonly found in shady, moist areas, and is spreading rapidly in woodlands as well as shaded landscapes and low maintenance turf. As a summer annual, reproduction is by seed that germinate in early to mid-spring (mid to late-March in Western North Carolina) and sporadically throughout the growing season. Plants flower in early to mid-autumn. This weed is prevalent in Henderson County where this grass can be found invading flowerbeds, turfgrass and woodlands. 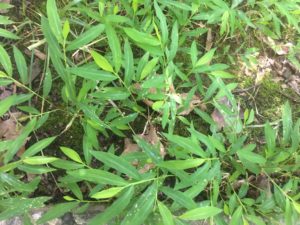 Japanese Stiltgrass is an invasive annual weed. It can prevented with preemergent herbicides applied in Mid-February

Controlling the weed is easy. Use a general herbicide to kill it after it has germinated. Or, prevent weed seeds from germinating with a preemergent herbicide applied in mid-February. Avoid spreading the weed by not sharing plants containing contaminated soil. 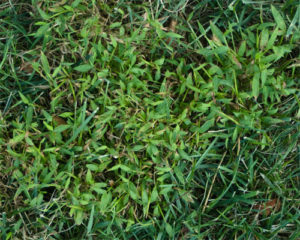 Japanese stiltgrass grows in shaded turf as well as woodlands.