Hollies are generally tough, pest free plants. However they can have some issues. One of the most common issues on hollies here in Henderson County is scale insects.

Scale insects can be found feeding on the back sides of the leaves of hollies. These sucking insects use a needle-like mouth-part to pierce leaves and drink the sugary sap inside. Scale insect droppings are sugary and drip onto the upper surfaces of leaves below. A black fungus called sooty mold grows on the droppings. 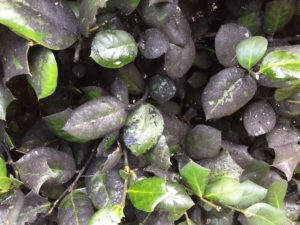 Sooty mold on the upper side of holly leaves

Unfortunately, to get rid of scale insects it is necessary treat the shrubs with an insecticide. An organic option would be multiple applications of Neem oil over at least two seasons. A non-organic option would be a products such as a systemic insecticide such as imidicloprid. It is simple to use; just mix it up in a bucket and pour it over the root system. The plant takes up the insecticide and it circulates in the plant’s tissues. The sucking insects drink the plant juices and die. This one time treatment will last for a year at least. The sooty mold will go away after the insects are dead. 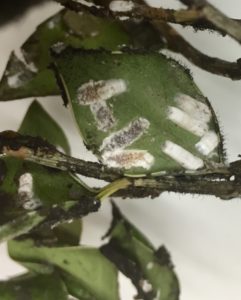 Scale insects on the underside of holly leaves