The Stories of Three Invasive Vines

Find this article at:
go.ncsu.edu/readext?697155
— Written By John Murphy and last updated by Emily Capps

My wife rolls her eyes when I mention invasive weeds. I suppose I’ve brought it up before. She gets the impression there are invasive weeds lurking around every corner. And she would be right!

Unfortunately many plants that were brought to the United States, either intentionally or by accident, have not behaved as they did in their host countries. In the U.S. these vigorous plants have invaded whole areas and swallowed up or pushed out native vegetation. The list of invasive weeds for NC can be found at the NC State University website. The list is far too long to cover all of them here, but here is the story of three, all vines.

English ivy was brought to the U.S. from Europe during the colonial period. The climbing evergreen ivy was embraced by country estates and is still maintained in some areas. But its rampant growth has choked trees and smothered ground plants and often results in vast monocultures. Bob Bullington once sold a number of varieties of English ivy when he ran his nursery in the 1970s and 80s in Hendersonville. By the 1990s, it had taken over a good amount of area at Bullington Gardens. We were able to eliminate most of it by hand pulling over a long period of time. It still remains densely established in a few spots, and the trees there are so damaged that they will have to be removed. English ivy is not easy to eliminate but it can be done with a combination of hand pulling, chemical treatment, and even burning. Goats have been used fairly successfully to control it along with other invasive weeds.

Originally from Asia, kudzu was introduced to the United States in the late 19th century, but became more prolific in the 1930s following the dust bowl. It was a recommended plant to control erosion on slopes that had been deforested. And it was seen as livestock fodder. Its rapid growth—growing about a foot a day in the spring, quickly forms a thick mat that smother every kind of plant. Known as the plant that ‘ate the south’, it now seems to be a symbol of the Southern landscape. Dense patches of kudzu are difficult to control and may take years through a combination of mowing, grazing, pulling, and chemicals. The root crown is particularly difficult to kill, but it must be killed if control is achieved. Fortunately, kudzu is not a plant that has taken hold at Bullington yet.

Oriental bittersweet was introduced in the 18th century due to its ornamental berries. It was often used to make wreaths in this area. The similarly fast-growing vines climb trees and choke out any vegetation in its path. The plant can send up new shots from its roots as well as propagate by seeds, birds can scatter them far and wide. Unfortunately, I did not pay close attention to Oriental bittersweet when it first showed up at Bullington about 12 years ago. It is now widespread here, climbing up trees and making thickets and shading them out. Younger plants can be pulled out, but be aware that roots can break off leaving enough for new shoots to grow. While I sometimes don’t have enough time to completely remove some plants, I’ve been trying to cut the woody vines at the base of trees that will at least free the tree up and stop the plant from making more seeds. Total elimination will require some combination of chemical and mechanical controls.

The list of exotic, invasive weeds is growing in our area. It’s important to know what you have in your yard and try to control those that negatively impact our natural environment. One excellent reference is A Field Guide for the Identification of Invasive Plants in Southern Forests. 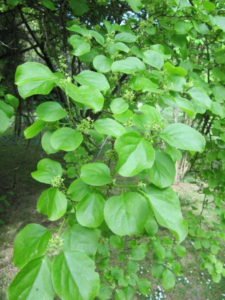 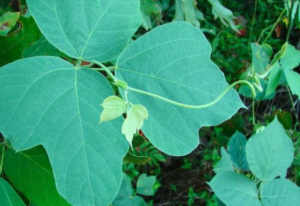 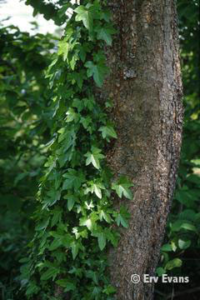