Summer of the Cicadas

Find this article at:
go.ncsu.edu/readext?697788
— Written By Steve Pettis

This is a re-post from CALS News:

Here Come the Cicadas! At Least for Some of Us

By Clyde Sorenson
Department of Entomology and Plant Pathology

Right now, in the northwest corner of North Carolina, a remarkable event is occurring – one that happens only every 17 years in any given place. With each night, more and more half-inch holes are appearing in the earth; more and more weird, alien-looking husks are clinging to trees and more and more black and orange, two-inch-long insects with brilliant red eyes are gathering in the trees. It’s the emergence of Brood IX of the 17-year periodical cicadas, and it is a sight (with accompanying sounds) worth seeing.

Cicadas are large insects related to aphids, planthoppers, and other insects that feed on plants with sucking mouthparts. There are many species of cicadas that appear every year, usually from mid- to late summer; we lump these together as the “dog day” cicadas. Most are black and green, and their songs help define summertime in eastern North America. While they have multiple-year life cycles, some come out every year — hence their annual appearances. Dog day cicadas tend to be wary and fairly solitary, the better to avoid predators. (All cicadas are completely harmless to humans, by the way.) 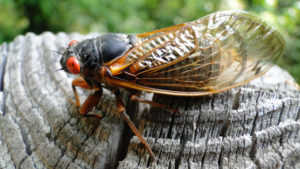 The seven species of periodical cicadas exploit a different strategy to cope with the possibility of being eaten before having the opportunity to procreate. The periodical cicadas in a given area all synchronize their emergence, so that when the adults come out of the soil, after feeding on tree roots for most of the previous 13 or 17 years, their sheer numbers swamp the ability of local predators to feed on them. They may, under ideal conditions, emerge at the rate of millions per acre. They gather in huge numbers, calling noisily, and they aren’t wary at all. Birds, squirrels and other predators soon consume all they can stand, leaving the bulk of the horde to focus on their reproductive mission. I’ve seen blue jays turn their heads in apparent disgust at the thought of eating another one. Why 17 or 13 years? We’re not really sure; one theory is that a long, prime number lifecycle makes it extremely difficult for specialist predators to evolve to synchronize with and exploit the abundance, but some argue against this.

The three types of 17-year cicadas

There are three species of 17-year cicadas, each with its own distinctive song. In a given area, the three species all emerge in the same year, although there may be a bit of seasonal variation when each species reaches its peak abundance. In most areas, the most common is Magicada septemdecim, which sounds a bit like a wailing alien spaceship. The second most common is M. cassini, which has a “buzzier” song. The least common is usually M. septendecula, with its clicking song. All three species benefit from the occurrence of the others, since the abundance of all reinforces the predator swamping effect. Only males produce the loud courtship songs; the females respond to males with a combination of movements and sounds to signal their acceptance. Cicadas “sing” with structures called tymbals found on the sides of their abdomens, just behind the thorax; they “sing” by flexing these plates at extremely high frequencies, causing a series of tiny sonic booms.

The circle of life

Once mated, female cicadas use a saw-like structure called an ovipositor to cut slits in twigs on trees, and then deposit their eggs safely in these cuts. This activity often causes the growth beyond the slit to wilt, or “flag.” While this looks bad for the tree, the damage is transient. The eggs hatch and the cicada nymphs either drop or crawl to the ground, where they burrow until they find a suitable tree root. They settle in for 17 years of sucking on tree roots, gradually deeper, until it is their turn to come up, sing, mate, lay eggs and die. The feeding activity doesn’t appear to cause significant harm to the host trees, although it certainly must have some effect, especially when the nymphs are large and near maturity. We think cicada nymphs keep track of the passage of time by tracking fluctuations in the nutrients they gather from the trees, and the variation in temperature over the course of the year; other cues may be important, as well. Their emergence is triggered by soil temperature — about 64°F  several inches below the surface.

Where you can watch the show

This year’s emergence is largely restricted to Wilkes, Surry, Ashe and bits of a couple of other northwestern counties in North Carolina. However, folks in other areas may see a few; most of these are early emergers associated with other broods. If you can’t make it to the northwest to see Brood IX this year, don’t despair. The Great Eastern Brood of 17-year cicadas will emerge across a wide swath of the eastern U.S. (including some parts of western North Carolina) next year. And the Great Southern Brood of the four species of 13-year cicadas will blanket much of the Piedmont of North Carolina, including parts of Wake, Durham, Orange and Chatham Counties, in 2024.