Henderson County Center to close at Noon Friday 9/18 in observance of Deputy Ryan Hendrix. Will return to regular hours on Monday 9/21

Find this article at:
go.ncsu.edu/readext?673565
— Written By Karen Blaedow

Orange Rust Showing Up in the Mountains-Time to Scout and Manage!

Spring has arrived here in the mountains of western North Carolina, and with the increasing temperatures, blackberry primocanes have started to emerge across Henderson County. This is a great time to start scouting for the important blackberry disease, orange rust. Glancing across an orchard of green lush new growth, spindly primocanes with misshapen yellowish leaves easily captures one’s attention. Upon closer investigation, the wavy leaves will have orange spores forming along the lower leaf margins, which is characteristic of orange rust. So far, this year, Navaho has been the most widely affected cultivar, however, we have found it on the primocane cultivar Prime-Ark® Traveler as well. Farms from the eastern part of the state are reporting orange rust on Prime-Ark® 45 and Ouachita. Osage, Natchez, Ouachita, and Von are considered resistant or less susceptible to the disease.

Orange rust is caused by two fungal organisms: Gymnoconia nitens and Arthuriomyces peckianus. Once a plant shows symptoms the rust is systemic meaning it will remain in the root system throughout the life of the plant and it’s floricanes will stop producing flowers. This is why it is recommended a plant showing symptoms be removed and destroyed. Confirm that the rust is orange rust and not the less destructive cane and leaf rust, caused by the fungus Kuehneola uredines. Microscopic inspection of the spores is the most effective way to distinquish between these two diseases. When in doubt have a county extension agent assist with diagnosis. More information on orange rust management can be found at: 2020 Caneberry Spray Guide 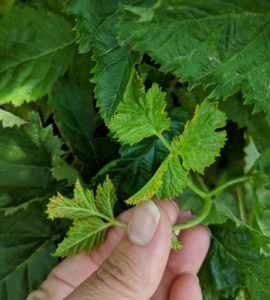 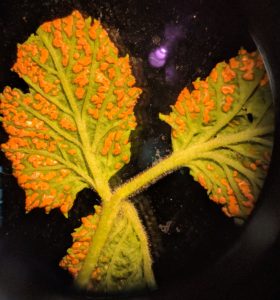 May is the Time for Early Broad Mite Management!

Last year we experienced a rise in broad mite damage in blackberries across the entire state. In order to get ahead of damaging populations it is important to control broad mites while the numbers are still low. What we have learned from work done by Dr. Donn Johnson at the University of Arkansas is that broad mites begin to infest and damage a few plants starting in May but by Mid-June a grower could expect to see widespread infestation and damage. Feeding damage is typically seen on expanding leaf terminals and laterals. We begin to see this damage when 5 broad mites per leaflet are present. When the mites feed they inject toxic saliva into the leaves causing chlorosis, curling, and distortion.

Broad mites are incredibly small so it helps to have a 20 to 30X magnification hand lens when looking for the amber-colored adults or their distinctive eggs. The eggs are clear with a geometric pattern of dots on the surface. Miticide applications should begin when mite numbers are at or above 5 mites per leaflet.
Agri-Mek is the most effective product we have, but it does not control eggs so it is key to make two sequential applications 7-days apart to get the most out of this product. In addition to Agri-Mek there are several miticides labeled and available in NC for broad mite control on caneberries. SEE CHART BELOW

Research is still needed to determine the best time to apply each effective miticide. 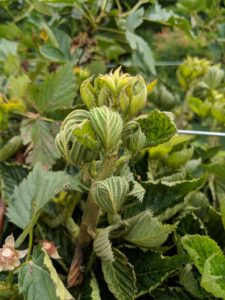 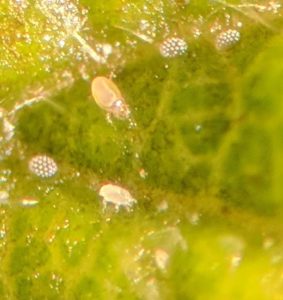