A Tribute to Earl and Ginger Smith, 4-H Professionals Extraordinaire

Find this article at:
go.ncsu.edu/readext?664061
— Written By Denise Sherrill

As a young 4-H’er from Mitchell County, my first encounters with Earl and Ginger Smith happened at the Western District 4-H Leadership Conference. The West was extremely proud that “we” had a leadership and citizenship conference that other districts in the state did not. This pride in the west was perpetuated by Earl and his agent colleagues and by Ginger and her volunteer friends. The “West is Best” was a chant that could be heard among those who developed leadership and citizenship skills in the west, often taught by Earl.

Earl and Ginger Smith loved 4-H’ers from anywhere in the west but they were always most proud of their “4-H kids” from Henderson County. Debra, Dawn, Diane, and Mike Dixon, Karen and Mike Bayne, David and Janet Ruff, and Tava Orr were always excelling under their tutelage but none more so than their own children, Phillippa and Raymond. If you saw the name of one of these Henderson County 4-H’ers on the room list at district, you knew you had tough competition. That occurred because Earl and Ginger and Earl’s colleague,  Joyce Armstrong always demanded the best of their 4-H’ers. 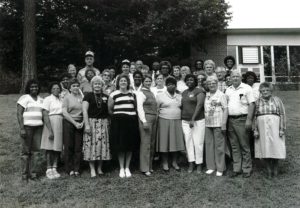 My favorite experience as a State 4-H Vice President was to travel to the Southern Region 4-H Volunteer Conference with Earl and Ginger. Once there, I was coached by Ginger on what to wear, what to attend, how to connect with others, and what workshops would be appropriate for a 19-year-old. Both Earl and Ginger watched over me from the time I got on the van until we returned back to North Carolina.

I loved having them come to camp when I was on the Camp Staff at Swannanoa because I knew they cared so much about their 4-H’ers having a wonderful time at camp. They expected good behavior but wanted Henderson and other county 4-H’ers to learn to swim, square dance, shoot bows and arrows and hit the target, take home a beautiful craft they had made and learn about wildlife and nature. I also observed how Earl, Ginger, and Joyce wanted the 4-H’ers to learn how to set the table, serve the 4-H’ers and make sure they got enough to eat.

As a 4-H Development Fund staff member, I was able to watch as Earl and his brother, Dick Smith, were inducted into the first North Carolina Hall of Fame class. Earl was modestly proud but he was more pleased that Dick was being inducted. I also watched as an endowment for Earl and Joyce was established to provide funds for Henderson County 4-H.

Earl was one of a kind! You always knew how he felt and what he believed! He believed in God first, his family second, and 4-H youth development third. The
4-H’ers in Henderson County, across the district, and throughout the state benefited from his strong sense of leadership and citizenship development. This Mitchell County 4-H’er was lucky to know the Smiths and luckier still, to have them as mentors and friends.

Note:  Earl Smith was the Henderson County 4-H Agent for twenty years (1957-1977), and continued to do 4-H work while he was the Ornamentals, Small Fruits, Turf and forestry Agent until 1985. After retirement, he volunteered with 4-H for many years. He passed away on January 4, 2020. Click here for the link to the Armstrong-Smith Endowment with the NC 4-H Development Fund: http://go.ncsu.edu/armstrong4h. 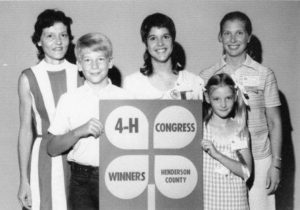 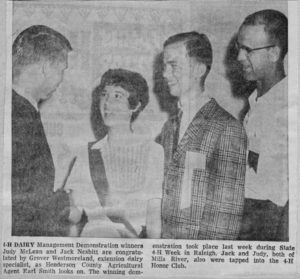 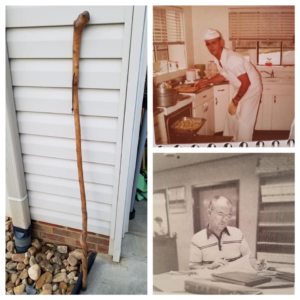 A collage of photos of Earl Smith, and one of the walking sticks that he made. 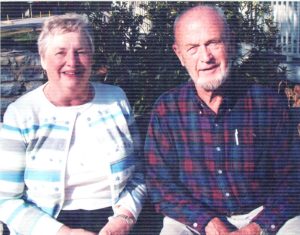 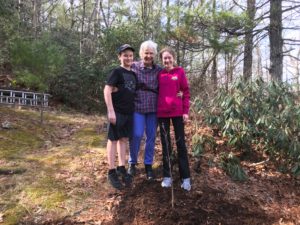 4-H members Gus and Maggie McCall planted a dogwood tree for Ginger Smith. The tree was donated in memory of former 4-H Agent, Earl Smith, by the N.C. 4-H Development Fund. Earl loved dogwoods. He also loved to nurture young people and help them grow and blossom into leaders in Henderson County.